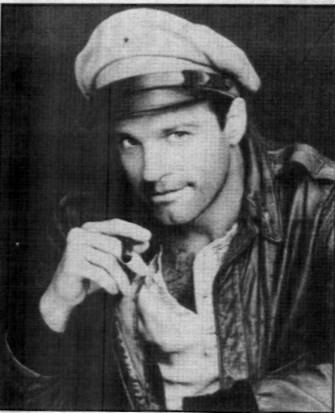 As fans of Tales of the Gold Monkey will attest, Jake Cutter is a man who will live virtually forever. (See Tales of the Gold Monkey-Full Service Website.) However, even some of Jake Cutter's biggest fans doubt his historicity, or at least our ability to determine his historicity. For example, in GEOGRAPHICAL MODEL: A Preliminary Reconstruction of the Geography of the Marivellas by Dr. Ernest J. McWhirtle the author appears to doubt the existence of the Marivellas which, as we all know, do exist, as shown by this recent map of the South Pacific. [1]

It is my goal in this paper (intended to be submitted to both the Seiber Islands Historical Review and Readers Digest, hence the snappy title) to "set the record straight"--to the extent possible under the Grand Duchy of Wotanberg's and the Seiber Islands' "Official Secrets Acts".

The key, I believe, to understanding Jake Cutter's place in history is to recognize that the Tales of the Gold Monkey was a television show whose creators were forced to rely on the unpublished memoirs of Michael "Corky" McCorkle. Although Corky certainly always attempted to be truthful, his recollections of the events in question were undoubtedly affected by his lifelong struggle with alcoholism and his terrible, but heroic experiences as a Japanese prisoner-of-war from 1942-1945. On the other hand, Jake Cutter whose recollections would have been quite helpful, never had time to write his memoirs as he was always in the thick of things, and would have be prohibited from publishing them, in any event, under the aforementioned "Official Secrets Acts" .

In 1933 Jake landed a co-pilot position on a flying boat plying the Caribbean and South America; it was not until 1936 that he became co-pilot of a Pan-Pacific Clipper which made regular stops in both the Marivellas and the Seiber Islands. Jake's short stint in China in 1937 (actually November-December of 1937 and the first week of 1938) was not with the Flying Tigers--which would not be created until 1941--but with the China National Aviation Corporation ("CNAC").[2] Although hired to fly cargo and passenger aircraft, he flew a few missions with the 14th Volunteer Bombardment Squadron at Hankou. In the last of these missions on New Years Day 1938, he shot down two Japanese bombers--making him an ace--but was badly wounded. General Chennault arranged to have Jake sent to Hong Kong to recover. He was accompanied by Corky. (Unfortunately, newspapers learned of his exploits and his fate. So strong was isolationist sentiment in the United States at the time that any American pilot caught engaging in an act of war on behalf of the Chinese was stripped of his citizenship, as Jake was.)

While Jake was recovering in Hong Kong, General Chennault also arranged for Cutter and Corky to be hired by the Wotanberg Overseas Airways Company (WOAC). They flew one of WOAC's two pre-production Grumman Geese in the Seiber Islands from May to September 1938. In appreciation of his heroic efforts in saving the vacationing family of the Grand Duke of the Grand Duchy of Wotanberg from pirates in August, the Goose Jake flew was renamed "Cutter's Goose" and given to him. [SOURCE] This is the plane which figured so prominently in the television series.

In addition to being given the Goose, Jake was given a "sweetheart" consulting contract. [SOURCE] Jake was also was given special privileges to fly in and around the Seiber Islands and to bring cargo into the Seiber Islands duty-free from the Marivellas. [SOURCE] To fulfill the conditions attached to those privileges, the Goose was also registered the Marivellas [SOURCE] which Jake made his "home port".

From late 1938 to July of 1941, Jake was a "free-lance" pilot operating out of Boragora in the Marivellas, as reflected in Tales of the Gold Monkey, at least some of whose stories are true, or at least close to the truth. Because of special privileges conferred on him by the Grand Duchy of Wotanberg , many of his flights were between the Marivellas and the Seiber Islands. Among the more significant events during this period not shown in the short-lived television series were Jake and Corky's heroic efforts rescuing many of the inhabitants of Tagataya when its volcano became catastrophically active in June of 1940. Despite official recognition and popular appreciation for those efforts, business declined after the destruction of Tagataya and got even worse as many more Europeans left the Marivellas in 1941 as the inevitability of a war with Japan became more apparent.

Deep in debt, Jake was inclined to stick it out until a disastrous all-night poker game on Bastille Day at Boragora's other bar, The Blue Parrot. By the end of the game, Jake had lost his last reserve of cash, Jack's eye (again), and the Goose to the owner of The Blue Parrot, Signor Ferrari. Facing utter ruin, Jake and Corky "rescued" the Goose and flew to the Seiber Islands. Laying low at Taratupa (the northernmost of the Seiber Islands), word came to Jake and Corky that Bon Chance Louie had arrested Signor Ferrari--and had him transported back to Casablanca-- after learning that the Bastille Day poker game was fixed. Although the legal title to the Goose (and Jack's glass eye) were soon returned to him, Jake decide to rejoin WOAC and sell the Goose back to the airline to cover his many debts. (As to Jack's glass eye, he managed to hang onto it until his death in 1945 while accompanying Cutter's (Aero-)Dragoons. on an otherwise successul raid in the Marivellas.)

During his absence, WOAC had been secretly nationalized and integrated into the Grand Duchy's armed forces. Commissioned a Lieutenant in the Seiber Rifles, one of Cutter's "other duties as assigned" was to recruit and train a platoon of so-called "native" infantryman to be deployed in WOAC seaplanes. (This platoon later became known as Cutter's (Aero-)Dragoons.) In November 1941, General Chennault arranged to have Jake and Corky attached to him to fly a few special missions for the CNAC. In December 1941 and January 1942 Jake again "volunteered" to fly some combat missions, this time with the American Volunteer Group ("AVG"), aka the "Flying Tigers". He was credited with another three "kills". In February 1942, Jake and Corky became separated when Jake managed to get a damaged P-40 out of an RAF base in Burma just before it--and Corky--were captured by the Japanese. Though heartbroken by the loss of his friend, Jake continued to fly both cargo and combat missions in Burma for another month until he was assigned to fly an assortment of American and British naval personnel out of Rangoon shortly before its capture by Japanese forces in March.[3]

For the next nine months, General Chennault arranged to have Jake ferry bombers and fighters for the both British and Americans from Egypt to India and China. Of course, during this time, Jake also managed to sneak in a few combat missions with the allied Desert Air Force in Egypt and first the AVG and then the China Air Task Force in China. In Cairo, Jake renewed his friendship with members of Wotanberg's Grand Ducal family who were in the Wotanberger Volunteer Group ("WVG") serving with the British and Free French forces in North Africa. He also became friends at this time with both Sergeant Joe Gunn and Lieutenant Rick Blaine. In September 1942, Prince (and Major) Parsifal von Weselstein, CO of the WVG, asked Jake (as a personal favor) to transport injured members of the WVG to the Seiber Islands. Returning to St Hubert, he began flying again for WOAC.

During the war, in 1943, Jake and Princess Koji married. The wedding was performed by the Rev. Willie Tenboom (who really was, despite, rumors of being a Nazi spy, a minister). In the absence of Corky, Todo served as best man. Sarah Stickney White, who had been commissioned as a U.S.Navy WAVE and was serving as military liason with the colonial government in the Seiber Islands, was maid of honor. Jack was, of course, ring-bearer. Jake and the Princess later had four children. Corky was the children's godfather.

During the rest of the war he participated in a variety of clandestine operations, both with "his" Aero-Dragoons and Princess Koji's Guards.[4] Many of these operations were carried out in conjunction with United States P.T. 13 under the command of Jake's friend Quinton McHale. Most of them took place in the French Marivellas which had been occupied by Japanese forces in January 1942. On the day following VJ day, Jake flew medical supplies into Boragora and was reunited with Bon Chance Louie and the other surviving habitues of the Monkey Bar, which has miraculously survived the war virtually unscathed (and with a five-year supply of sake).

In September 1945, Jake assumed leadership of the newly organized Seiber Islands Division of WOAC (now Seiber Airways). Jake appointed Corky as his Chief of Maintenance and Operations upon the latter's release from a Japanese POW camp and return to St Hubert. Unfortunately, owing to maltreatment during his imprisonment, Corky was unable to fully attend to his duties and was quickly "bumped upstairs".

Under Jake's leadership, WOAC's Seiber Islands Division prospered. A grateful nation elected him to the first Kautauna'iga (or Parliament) formed in 1950 with the Seiber Islands' independence and renamed the airport on St Hubert in the Seiber Islands in his honor upon his retirement in 1968.

The ultimate fate of Jake Cutter--like much of his life--remains shrouded in mystery. In June 1972, one of Jake's friends, Rick Blaine (along with his wife) became missing while sailing from St Hubert to Boragora in the Marivellas. Jake (and his wife) decided to join the search in Cutter's Goose, but themselves became missing, and like the Blaines, presumed dead. Perhaps it is best that the final image the world has of Jake Cutter is his taking off into the sunrise in his newly restored Goose.[5]

[1] Readers will note that capital of the Marivellas is indicated on this map as Boragora and not Tagataya. The capital was moved to Boragora in 1940 when the volcano on Tagataya became active and eventually destroyed much of the island. Of course, other events in the world overshadowed the destruction of Tagataya. However, this event was the basis of the 1961 motion picture The Devil at 4 O'Clock.

[3]Among the American naval officers was LtCdr Quinton McHale, who had, as captain of a tramp steamer, assisted Jake in saving the vacationing Grand Duke of Wotanberg and his family from pirates in 1938. McHale had just obtained a direct commission and been assigned to command a P.T. Boat at Taratupa in the Seiber Islands.

[4] This unit had been formed in early 1942 out of the remnants of Princess Koji's army which had fled to the Seiber Islands in 1941 with her when the Japanese Army expelled the Princess from the Marivellas. The Japanese did this when they learned of her relationship with Jake Cutter.

[5] I have personally investigated reports that both the Cutters and the Blaines have been sighted on a small island (known as Krebs Insel, i.e. Crab Island) lying east of the Marivellas and north of the Seiber Islands. In 1992, my initial search of the island revealed no evidence of either the two couples or their boat and airplane. However, wreckage was found of both a cabin cruiser with the unlikely name S.S. Minnow and what appeared to be a Lockheed Electra 10E. Owing to the approach of powerful typhoon, this wreckage and other artifacts had to be left behind on the island. (When we reached safety in St Hubert, I discovered that in our haste we had also left behind my camera and all the film I had shot during my search.) When I returned a week later, it was clear that the typhoon has swept away every trace of any earlier visits to the island.