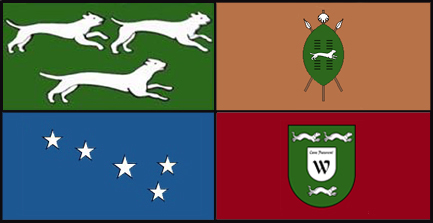 The Grand Duchy of
Wotanberg

The Grand Duchy of Wotanberg is a small, but very independent country surrounded by Germany. (See maps) The spirit of this small nation and its people is reflected in its national animal--the weasel-- and its traditional national motto--"Cave Putorem" or "Beware the Weasel", and its national anthem ("Cave Putorem", sung to the tune of "Pop Goes the Weasel").  (This spirit is also reflected in the country's more modern, but unofficial motto--"Eagles may soar, but weasels are never sucked into jet engines.")

Through a  fortuitous clerical error, the Grand Duchy was left off of the maps drawn up by the Congress of Vienna following the Napoleonic Wars and most maps published since then. This has meant that Wotanberg has been generally ignored during Europe's many wars and upheavals and remains relatively unspoiled by the tide of progress.

The Grand Duchy of Wotanberg offers the English-speaking visitor an opportunity to visit a quaint little foreign country where English really is a second language. (English was designated as a second official language of the Grand Duchy in honor of Major Sir Trevor Patrick, whose companies of Irish and Scottish Foot repelled an attempted French invasion of Wotanberg in 1815. The grateful Wotanbergers also changed the official name of the Duchy's capital from Weselstein to Trevorstein in his honor and celebrate both St. Patrick's Day and St. Andrew's Day in honor of his Irish and Scottish soldiers.)

The Grand Duchy of Wotanberg can be reached by auto or via Air Wotanberg, but it is recommended that the visitor take the Wotanbergerbahn (the Bad Wolf und Wotanberg Eisenbahngesellshaft) so as to fully appreciate the singular beauty of this small country that time forgot.