Notice: Use of this site constitutes your acceptance of these Terms of Use.
The Wines of the
Grand Duchy of Wotanberg 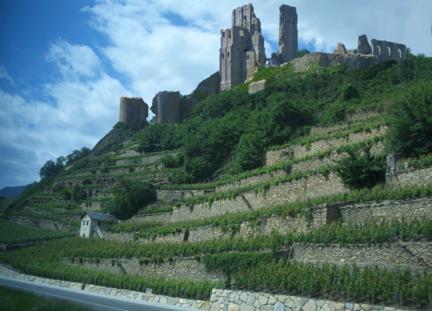 Since time immemorial the wild vine has grown in the Wotanberg and prehistoric man must certainly have refreshed himself with the small blood red grapes which would ripen before the frost. Descendants of this wild vine are still found in isolated parts of the Drachental and produce grapes which are transformed today into the Duchy's famed Drachensblutwein ("Dragon's Blood Wine").

It is now believed that its was during the relatively brief occupation of region by the Romans in the first couple of centuries of the Christian era that Italian and Greek strains of grapes were introduced in the region and also grafted onto the local hardier variety of vine. With the retreat of the Romans, the locally dominant tribes assumed responsibility for management of this important natural resource.

The Grand Duchy of Wotanberg is believed to be the first country to have adopted national standards regarding wine. This took place in 1646 when the festival to celebrate Grand Duke Gottfied's formal establishment of the "Church of Wotanberg" was marred by a local vintner's very bad wine. After brief consultation with the remaining vintners, the Grand Duke issued an edict requiring that all wines be categorized first by color--rot ("red"), rot-helle ("rose"), and weiss ("white")--and then by quality as determined by the Grand Duke's Kellermeister ("Keeper of the Winecellar")--beste ("best"), gut ("good"), and schlimm ("bad").*

Later, vintners were permitted to identify certain wines by either the variety of grape or what is now known as an AOC ("Appellation d'Origine Contrôlée", a French term for a denominated, governed wine region) including, for example only, the following:

* The soldiers of Major Sir Trevor Patrick's companies of Irish and Scottish Foot which repelled an attempted French invasion of Wotanberg in 1815 came up with their own nicknames of the Grand Duchy's wines: